Welcome to my webpage devoted to the MUL-3333 (MUL3333) ESR tester. This device may be found under several brand names, including MAT Electronics, Nippon America and Sun Rise, the first being the most common. Research indicates that it is probably manufactured by the Chinese firm Konstar Electric Industrial Co., Ltd. My review is based on a unit I purchased in early 2012 but as it is possible there have been variations in the circuitry, what I say may not necessarily apply to every one of these models ever manufactured.

As a long-time electronics technician, I'd been interested in purchasing an ESR meter for a number of years, but could not really justify the expenditure until recently. I did a considerable amount of research on the Web in an attempt to locate a suitable meter, and found that the MUL-3333 was the least-expensive of the few types that are available. The handful of comments about the instrument I was able to find generally indicated that it was suitable for its intended use, but certainly not the best one available. Therefore, I decided I would put up my own webpage to aid others thinking of purchasing this piece of test equipment in making a decision.

ESR, or "equivalent series resistance" meters are a relatively new addition to the arsenal of the electronics repair technician. They allow one to tell if an electrolytic capacitor has developed a high internal resistance that may affect the operation of a particular circuit, and to do so without unsoldering the component from the board. In the case of the MUL-3333, this is accomplished by applying a low-amplitude ultrasonic waveform to the capacitor under test and then measuring the amount of energy that is not being absorbed by the capacitance of the part. Depending on the value of the capacitor, most of the alternating-polarity signal will be dissipated if the capacitor is a good one and it will usually register as though it were a short circuit, or with a resistance of not more than just a few Ohms. That said, the ESR reading will be lowest for high-value capacitors and highest for low-value ones. In addition, low-voltage capacitors seem to exhibit a lower resistance than those rated for a higher working voltage (wV). When in doubt, a questionable reading may always be compared with that from an identical-value part known to be in good condition.

An ESR meter is not a substitute for a standard capacitance meter that checks the value of a capacitor in microfarads (uF or mfd), for that is something it can't do. However, the ordinary capacitor checker likewise cannot test for an abnormally high internal resistance, so each of the two meters serves a different purpose. To put it another way, a capacitor with a high ESR may test perfectly fine for capacitance since the internal resistance often doesn't affect this measurement, yet work poorly (or not at all) in the circuit. In addition, the plain capacitance meter generally doesn't work well with the capacitor under test still connected to other components on the board. On the other hand, the reading of the ESR meter is most always unaffected by an in-circuit test owing to the ESR of a good capacitor being much lower than any other resistances in the circuit. Plus, the small amplitude of the test signal is below the level needed to trigger any semiconductor junctions into conduction.

Now that I've given you a general overview of how an ESR meter works and how it can be used to locate bad electrolytic capacitors both on and off a circuit board, let's get into the specifics of the MUL-3333. 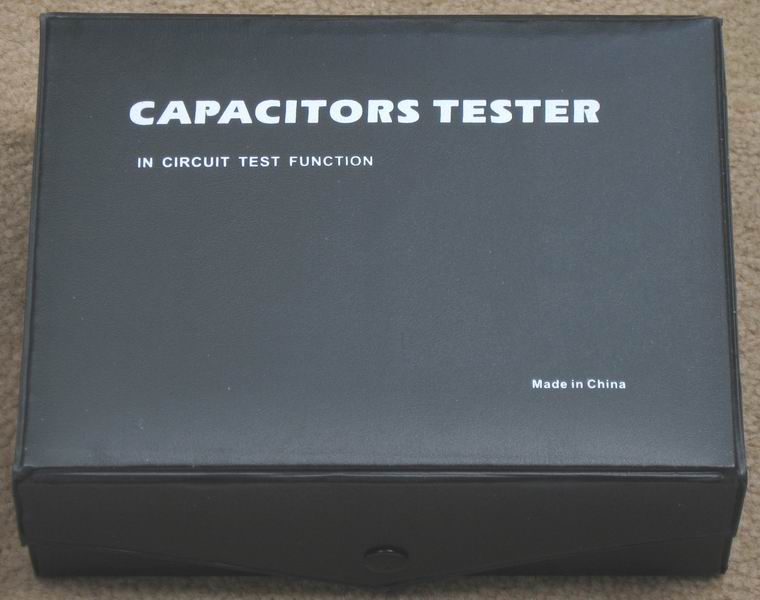 The MUL-3333 comes in a vinyl-over-cardboard case with a snap that holds the cover flap closed. It measures about 7.5 inches x 5.75 inches x 2.5 inches. I don't know what formula the Chinese are using, but the plastic has a strong odor reminiscent of tar and moth balls. I've read where others have relegated it to the garage for several days to air out. I put mine out on an enclosed porch, where it still stunk after several days. 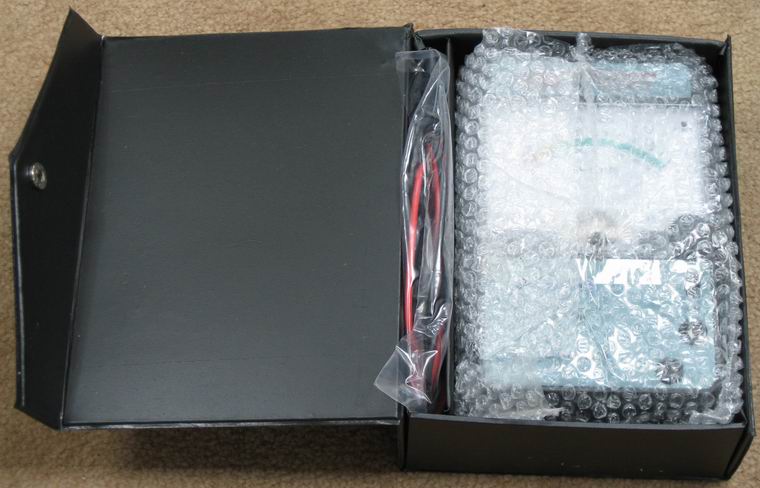 Inside the case is a floppy vinyl partition. On the left of it are a set of test leads in a plastic bag and to the right the meter wrapped in a sheet of flimsy bubblewrap. Although the test leads are color coded red and black, one does not have to observe polarity in this application. 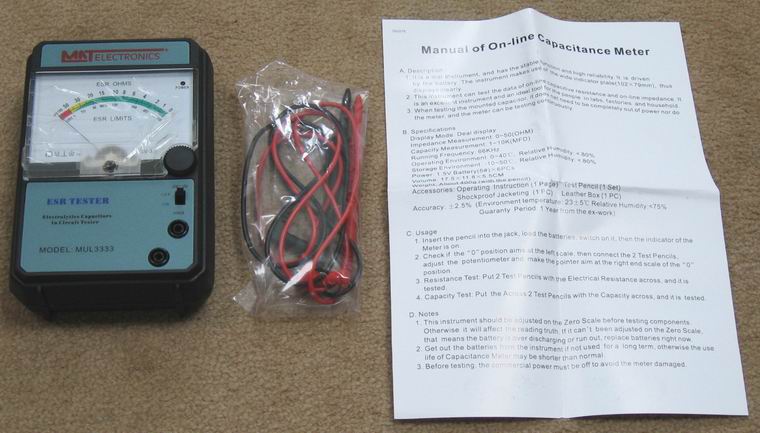 A sheet of self-adhesive plastic covers the meter's face to protect it. Each end of the two test leads has a protective plastic cap that must be removed before they can be used. Those on the meter end don't seem to serve any real purpose, except perhaps to protect the contacts from moisture. The single instruction sheet, shipped beneath the meter, is of little help due to the poor English. 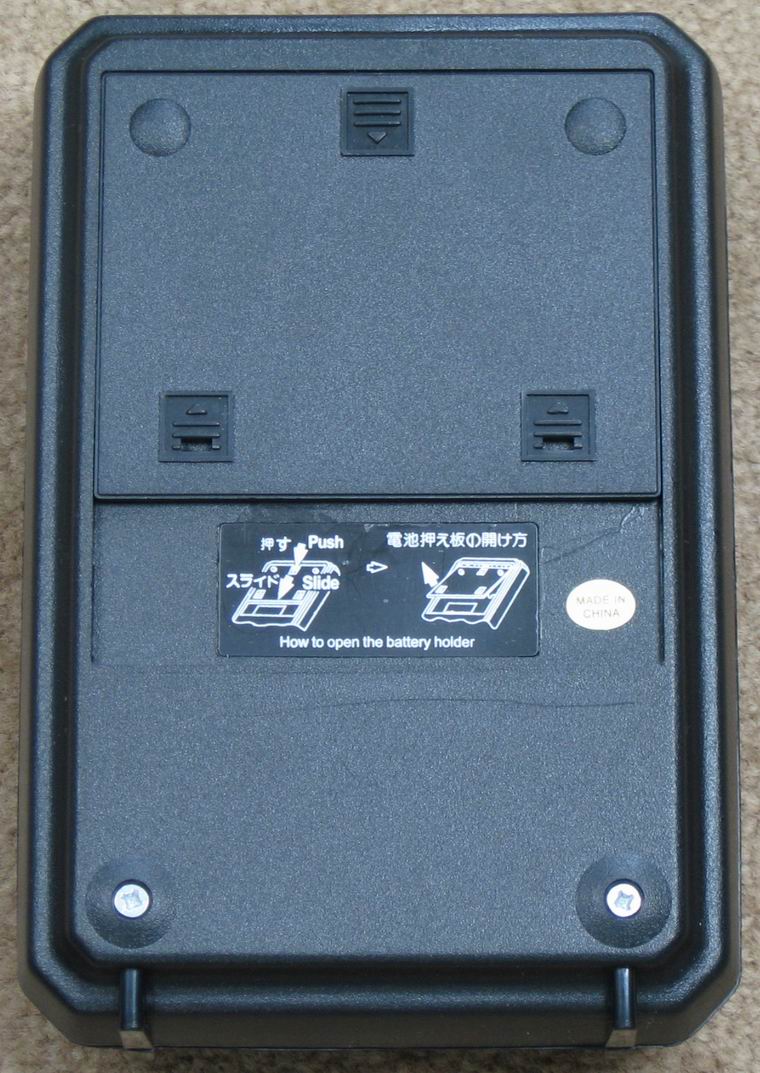 The battery compartment is not the easiest thing to get open. Fortunately, a diagram is attached to aid the user. Basically, one slides it down a bit from the top and then lifts it off from the lower edge. Unfortunately, I've experienced several occasions where the top gets caught while the bottom is free. 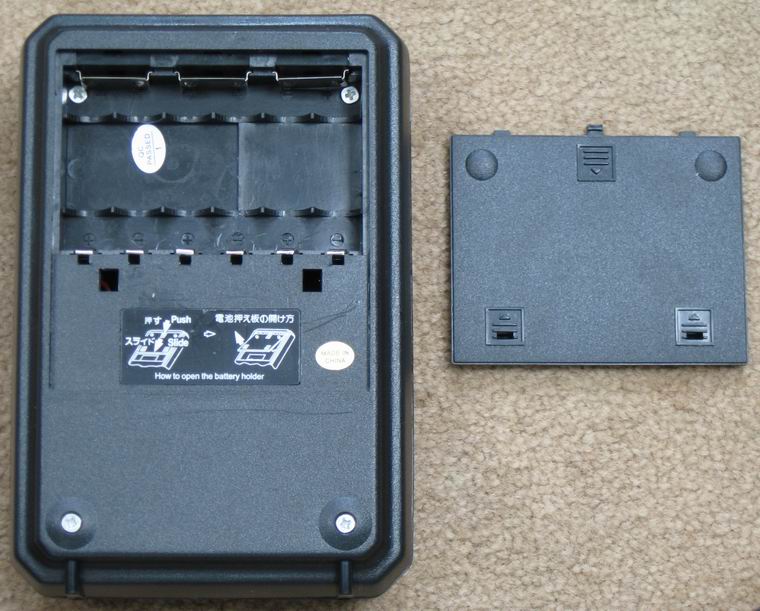 The MUL-3333 takes six AA batteries. Therefore, you would think it runs on 9 volts, but that is not the case. Each group of two batteries is actually wired in series and then paralleled with the two other pair for an overall output of just 3 Volts. You can actually run the meter from just two cells, but because the internal circuitry is only being supplied with its minimum operating voltage, the additional four batteries may be needed in order to have a reasonable amount of life. My tests indicate that you'll have to replace the batteries long before most other devices would consider them to be weak. The good news is that you can still put them to use in a less-demanding application. 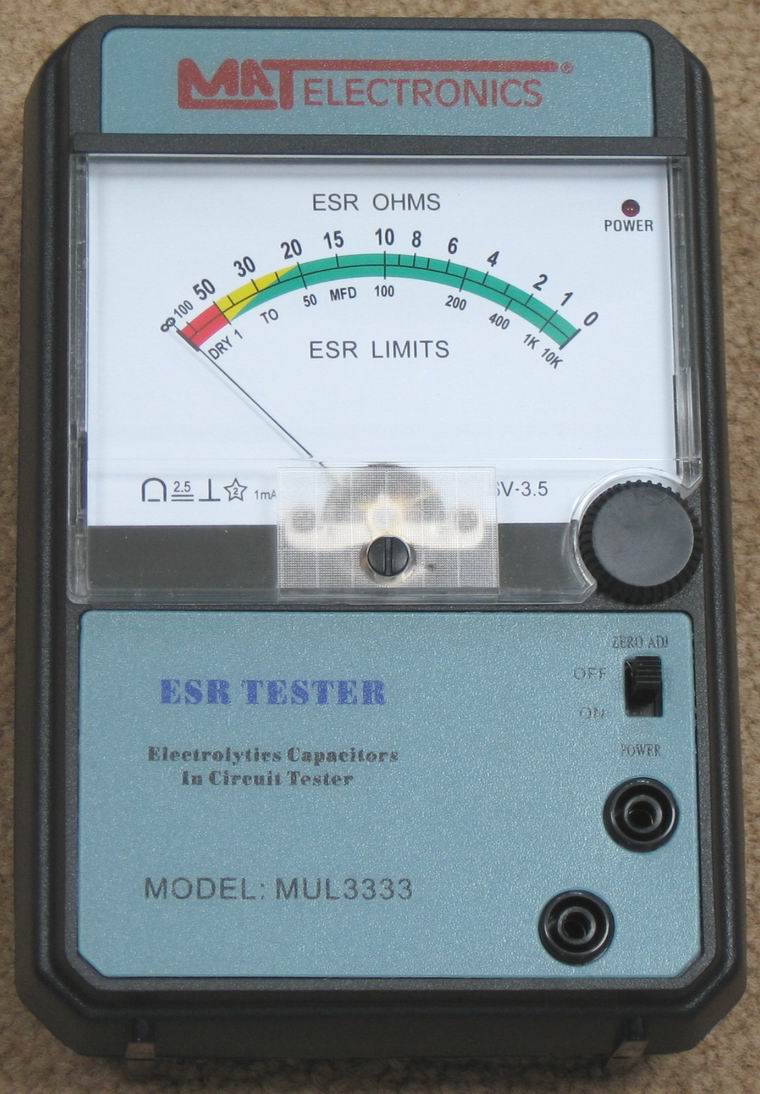 The meter has a slide-type power switch which operates counter-intuitively with "on" being the down position. A small LED lights bright red whenever power is being applied and will still be brightly illuminated even after the batteries are too weak to run the meter. The meter zero knob likewise operates the opposite of normal, and is adjusted so the needle is at the right end of the scale when the two test leads are shorted together. This adjustment compensates for changes in battery voltage and some resistance in the leads. The meter face is marked ESR Ohms (infinity to 1 Ohm) on the top scale and ESR limits (dry to 10K) on the lower one. These lower numbers refer to microfarads (mfd or uF) and roughly indicate where the needle can rest for the highest acceptable amount of ESR for that particular value of capacitor. In practice, most good capacitors will read little or no ESR, except for those combining a very low capacitance with a high wV. The actual accuracy of the upper scale is doubtful, as a precision 1 Ohm resistor read 1.2 Ohms, a 20 Ohm measured 35 Ohms and a 50 Ohm resistor registered greater than 100 Ohms when I connected them across the test leads on this meter. 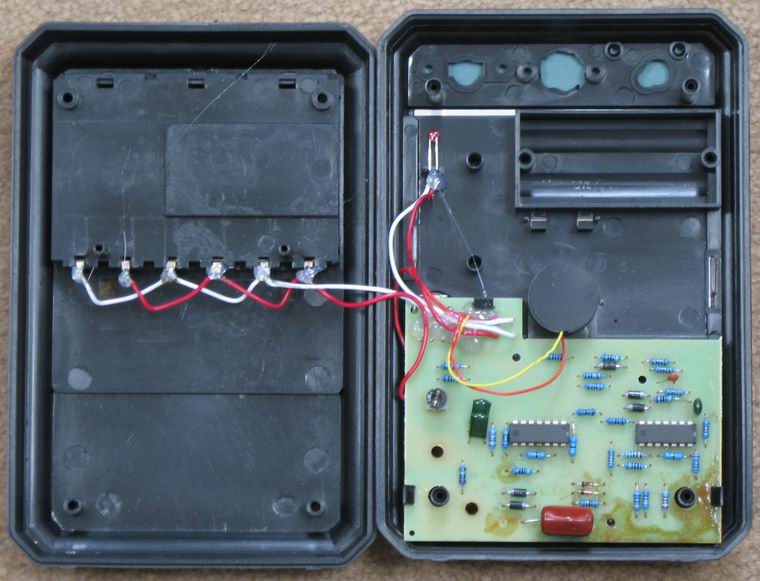 The circuit design of the MUL-3333 appears not to skimp on components. It utilizes two UTC324D (LM324 equivalent) quad op amp ICs; four polyester capacitors and one of the ceramic type; seven diodes (5 of which appear to be 1N4007s); twenty-five resistors and three resistor-styled jumpers; a trimmer potentiometer, switch, LED, zero-adjustment potentiometer and of course the meter movement. Going strictly by the parts count and supply voltage, the circuit may be very similar to that found at the URL http://electronics-diy.com/schematics/1010/ESR_Meter_Schematic.jpg. Either the plastic case is designed to house different testers or there's been a design change, as large holes and other areas in it were clearly intended for something that is not there.

Although the instructions list the operating frequency at 66KHz, my measurements indicate it is actually about 80KHz.

Despite some obvious irregularities, the bottom line is that the meter I purchased has successfully located issues with some of the capacitors I tested that would not have been identified otherwise. In one instance, I discovered that two identical electrolytics from the 1950s had a poor electrical connection where the negative lead was riveted to the end of the aluminum can. One only wishes the price of these meters was lower, but we are no doubt paying for their scarcity since they are not nearly as popular as the common and inexpensive multimeter. I hope the information I've provided helps you to reach a decision on whether or not to invest in this piece of test equipment.